I absolutely love the movie ’13 Going on 30′ with Jennifer Garner and think it should be made mandatory viewing for every girl who ever deluded herself into thinking her teenage ideas and dreams would in any way resemble reality.

Missy’s friend (Not a Bow in Sight) has a post here in which she asks us to write a letter to our 20-year-old self. I’ve purposefully blocked out my life at 20 but, thanks to my mom, here is a picture of me at 17 which is close enough and pretty well sums up all I really cared about during that period in my life: Hair and Clothes. {For the record, this wasn’t daily wear. I was getting ready for my Senior Banquet.} 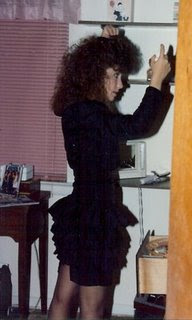 You are not fat even though you are currently devastated over the size of your thighs. Don’t worry, there will come a day when four babies will destroy any possibility of seeing your cut abs and collar bones again, but it is not this day. Enjoy the fact that your whole body fits in that size 2 dress because that thigh you think is so large now will pretty much double in size and half of you will not fit in the circumference of this frock.

Speaking of that dress, twenty years from now you will be mortified that you bought a barrette with matching ruffles as the skirt even though it can barely be seen because of all the back-combing going on. Matchy-matching is just not cute unless you are six. One bit of good news though…the black hose seem to be making a semi-comeback though I should tell you that if you’ve worn a look once you should never, ever repeat it in a later generation. Not that you won’t be tempted to buy that sweater dress and leggings but please, for both our sakes, resist. Your future husband and children will thank you.

The color mauve is butt-ugly and pirouette dolls belong in B-Horror films, not on your bedroom shelves. And that little white lock box on your table? There’s more money in that thing than you will ever carry in your wallet your whole adult life. You, my friend, are rich.

But you think you are going to be richer because even now you have plans to go to college and move away to the big city. You just wrote in your Senior memory book that you want to be the CEO of a major corporation. You want a brownstone apartment and you NEVER want a husband and kids. Oh poor honey, we’ll get to that in a minute.

You see, the truth is you have all these big dreams and none of them will happen quite like you think. The full college scholarship you just found out about? It will be recalled because of a mystery unsigned paper. You will be devastated because, just like a vapor, all your plans will disappear and the only thing that will console you one little bit is that cute guy standing there when the smoke clears.

That boy is Luke. The one who drove you crazy with the various girls who like to show up at his house. The first guy you ever decided was worth a fight. The one with the mullet you think is so incredibly beautiful. News flash: That hair will have a song written about it one day and it won’t be flattering. The good news is that when he decides to cut it all off he’ll still be as cute as ever. Your hair deserves a post of its own. {A post is something we’ll have to talk about when you find out about the Internet. Total space age stuff that we’ll reserve for another conversation.}

And I’ve saved this last part for last. You might want to sit down.

You aren’t moving to New York. You are going to marry Luke and have four children and twenty years from now, you’ll live in a town of 800 looking at a picture wishing you could regain that figure and that cash-stuffed lock box. You’ll love a show called Lost and wish you could go BAAACCCK and do a few things differently but will quickly realize that God is in control and you couldn’t change a thing if you tried.

Oh. Yes, I did mention God. I know, it’s a shocker but you should know you love Him and every day you are looking for ways to serve Him more. And that’s a good thing because honey..are you sitting down?

You are going to be a preacher’s wife.

Lisa? LISA?! Can someone help me here!??

Oh, what am I worried about? 20 years from now you are still here so everything turns out okay. Actually, things will turn out more than okay.

They’ll be just about perfect.

On Friends and Home