The school year that is and I couldn’t be any more pumped than if I had just finished 30 Days of Shred and discovered my arms had morphed into the exact representation of Jessica Biel’s.

Okay, so maybe I’d be a tad more excited about the arms than the school being out but the thoughts of either one – no matter how unlikely the buff biceps – make me plain giddy.

It truly doesn’t take much anymore.

So, this week has been filled with Awards Days and Kindergarten Graduations and year end luau’s. If I weren’t such a Loser Mom, I would have tons of great pictures to show you. Unfortunately, the camera fiasco has severely limited my ability to capture thousands of words in a single image. (Thank you for all your suggestions! I’m watching sale papers now that you’ve given me some direction.) You’ll just have to settle for significant verbiage and a few charity pics from girlfriends who love me.

Let me see if I can succinctly summarize all these events: My kids are brilliant and they received lots of accolades for being so. I know that sounds totally obnoxious but that’s okay. They deserve to be applauded, loved on, acknowledged and if their momma won’t do it then I don’t imagine anyone else will feel so inclined. I’m incredibly proud of what great little human beings they are becoming and full well recognize they outshine any example I’ve been (or failed to be) for them. This is where I give full credit to their daddies (Heavenly and earthly) for exemplifying biblical manhood for the boys and the adoration of a doting father over that precious girl. Yes, I am one blessed woman and my heart is overwhelmed within me as I sit here telling you so.

Here’s Boy One (far left) getting a medal for being on the Scholars Bowl Team. He couldn’t get that thing off his neck fast enough after the ceremony. Someone tell me why a teenager wouldn’t want to walk through the halls in a Team Nerd necklace? I only felt slightly more sorry for the guy who received a ringing liberty bell as an award. I have to give a major shout to the teacher who gave her Spelling Bee Champ a gift card to Rue 21. Can you spell C-O-O-L? 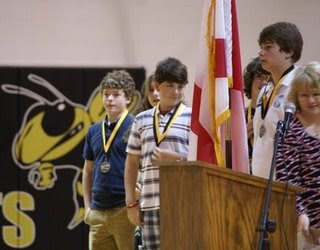 {Nice save, Deb! Thank you!} but I have to show y’all this one that I love so much I could wallpaper his room with it. We had Buddy Pictures at school this year and this is Two (far left) with his besties. Anyone thinking Saul, David and Jonathan? (No, Saul is not standing on a box and yes, he’s the same age as the other boys.)

Here’s the picture Deb just sent me. I had to add it because I’m not altogether sure y’all have ever seen Luke and this is a great picture of him. He’s threatened me in the past about putting him on the blog but I think he was just afraid I’d show the 80’s mullet.

If y’all hang out with me on FaceBook, then you know every night of our late-winter, early spring lives are spent on the baseball fields. Thanks to the photographic prowess of my bff homegirl, Deedra (who also took my new bio pictures), my Boy Three’s aka Big Daddy’s pitching debut has been captured in great detail. Check these out. Smoltz-y better guard his mound.

What about it, Catch? Fast ball or slider?

Boy’s got a booty like his momma. You can thank me now that I haven’t worn baseball pants since the 80’s nor do I plan on doing so ever again.

Maybe if I hold my tongue just right it will be a strike.

One spout short of a teapot.

And now that I’ve unintentionally paid homage to all the Male Children, here’s one of The Girl and her BFF Forever. These two are the epitome of All Things Frou Frou.

It’s official: The relief of summertime has been overshadowed by the joy of completing this post.

Y’all have a fabulous weekend!

It Is With Great Joy I Can Now Show You Stufff