I don’t know any other way to break up the tons of photos I have other than to recap one day at a time so heeeeere’s Thursday!!

In spite of an overweight, out-of-balance plane, Brooke and I arrived safely in San Antonio Thursday afternoon. I was thrilled out of my mind that Joanne, (already pictured in previous post) was also at the airport and we were able to cab over to the hotel together.

I called Patty after we were settled who told us to meet her, Kim, Fran, Georgia, and Jenny in the Concierge Lounge. I had no idea what that was, (I’ve told y’all I’m country come to town) so I was a little intrigued at the thoughts of hanging out in a Lounge with my blog bff’s. What happens in San Antonio?

Anyway, when we got to the door, it slammed in our face and promptly reopened to the sounds of a zillion squeals and giggles and a burst of camera flashes like I’d never seen. In fact, I felt a little like Paul on the road to Damascus except it wasn’t anywhere near that spiritual. 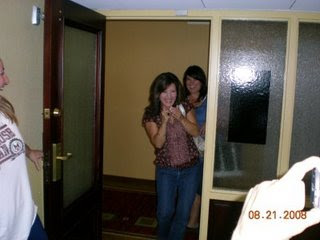 Shortly after our meeting in the VIP lounge, (y’all Patty has ROCKSTAR status at the Marriott), we went on a river cruise with some of the other Siestas.

The river was just incredible. There were restaurants and shops all along the banks. A little fyi – I almost fell smack in it later on while trying to take a video for Luke. Wouldn’t that have been cute?

This is St. Anthony, the patron saint of small children and lost things. Apparently, my status as a good Baptist girl didn’t evoke any blessing because later when Brooke and I tried to find the Rainforest Cafe we ended up lost in a downtown construction zone. Nice. (We eventually asked enough people for directions and found our way. Had I been my husband who refuses to do such a thing, we’d still be wandering around down there.)

I'm Back From the Fiesta